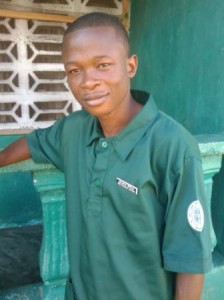 While working on my computer in February of 2005, I received a chat request, via the internet, from a certain young man who identified himself as jtutu. After about an hour of discussion, it became apparent that Jallah was a 21-year-old refugee living in the Buduburam Refugee Camp in Ghana, West Africa. I was blessed by his deep knowledge of and apparent love for Jesus and the scripture. It was definitely apparent that he knew the Lord intimately and our sharing was deep, encouraging us both in spirit. It also became clear that he was in desperate need of life’s most basic necessities – water, food and shelter. What blessed me about this young man was his deep faith and trust in God that He would continue to supply his needs no matter what. Jallah never once asked for money, but only that I might consider assisting him in finding a sponsor in a resettlement program that was, at that time, available in Canada. You can read this initial dialogue and be blessed too!

Over the following week, or so, our relationship grew and it became evident that I had become more than just a pen pal. I was quickly becoming a father figure in his life in place of his own father who he lost some 9 years earlier in the Liberian rebel wars. I was his sole source of encouragement and potential support in that horrible camp where he had been alone in exile since 1996.

Then, one day, while chatting with Jallah, something very unusual occurred. Another chat window opened on my screen from someone else 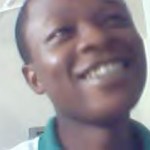 requesting to get to know me. Mercy was a 26 year old woman from Liberia, the country that Jallah was from. I was curious as to why it was Jallah was unable to return to Liberia and so asked Mercy about the living conditions in Liberia. She shared the difficult situation that still remained in Liberia at that time, but then informed me that she was currently living in a refugee camp in Ghana. I asked what camp and she responded, “The Buduburam Camp.” As it turned out, she was in the exact same internet café as Jallah and I was able to introduce them to each other from my office on the other side of the globe. The three of us were in amazement and rejoiced at how God used someone so far away to bring believing people together using the internet… a modern miracle! You can read this dialogue yourself. 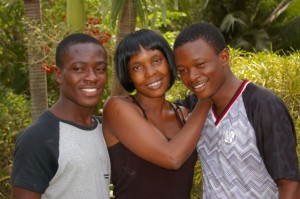 In the weeks that followed we grew close as a family. My own family and I, as well as our fellowship group here in Edmonton, have grown to love and appreciate Jallah, Mercy, and her brother, Trokon. The three of them also became close and considered themselves to be a family, encouraging one another and sharing whatever aid we were able to send. 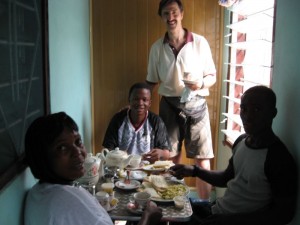 In 2009 I had the wonderful opportunity to travel with Karen Barkman of Provision of Hope to Ghana and Liberia where we visited the Buduburam Refugee Camp and spent a couple of days with Jallah,Mercy and Trokon. We laughed, we cried and we rejoiced in the Lord’s doing. We walked through the camp and saw where they were living as well as did some shopping for needed items in Accra, ate pizza and drank soda. They were so very blessed and grateful for the visit and the support!

View a video taken in 2010 when we met Jallah, Mercy and Trokon for the first time on the camp in Ghana. 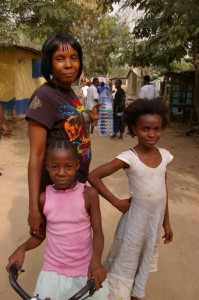 In 2011 we managed to get them back and settled in their home country of Liberia. Mercy travelled into the interior looking for friends and relatives and sadly we have not heard from her in many months. We hope and pray that she has found support in her community and perhaps one day we will re-connect. 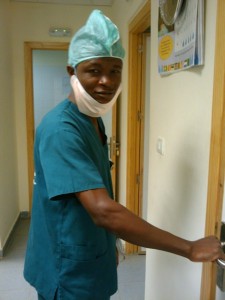 Jallah, however, completed his 3 years of nursing training at Mother Patern College of Health Sciences, one of the finest colleges in Western Africa, graduating with distinction.

He was Class President and has maintained top marks in spite of periodic struggles with illness. Jallah is a committed, hard-working and diligent student and has received high commendation from the Director of Nursing…

“Jallah Tutu joined our institution in September, 2011 and is presently a third year student. Jallah is respectful, hardworking, dedicated and studious. His cumulative GPA is 3.04. He has leadership ability and is the Prefect for his class. Helping him to continue his education will be of no regret to you.” 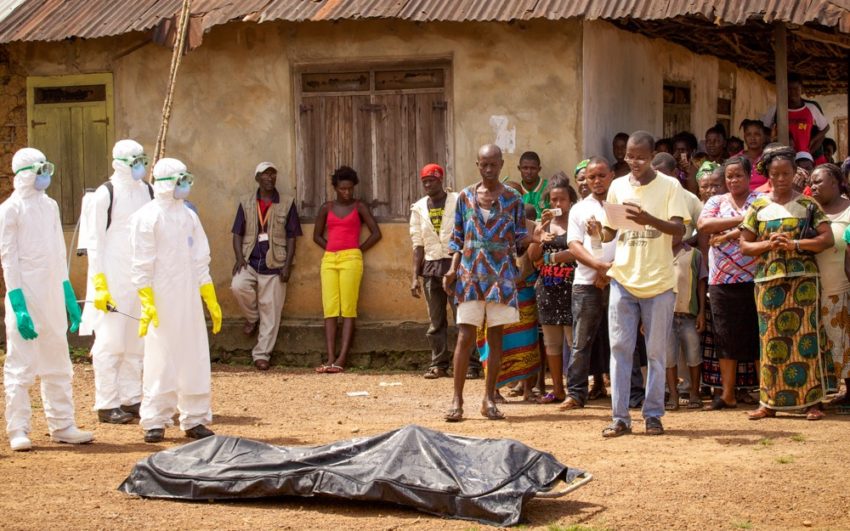 “During the horrific Ebola outbreak, in my community, there was a boy involved in a tragic motorbike accident, his leg got broken, he was admitted at one of our hospitals here in the midst of the Ebola outbreak and they could not help him, he was brought home and a native doctor was dressing his wound and at the same time trying to restore his leg back to normality. He began to rub the native herbs into the deep wound and it got very deep and odorous. His grandmother rushed to my place early morning and begged me to please help them in their dire situation and she even said they did not even have food to eat and could not pay me but was just asking for help and praying that I can help them. Without any hesitation due to the love of Christ in me, I started with the treatment, the little boy started to develop Tetanus with these signs (locked jaw, severe stomach ache, muscle stiffness). I was able to recognized this immediately and started with some antibiotics and I also served him TAT STAT and after two weeks of treatment, he started feeling better but I dressed the wound for three months because it was very bad to see and so deep. I used three packs of gloves, flagyl infusion, fortified procaine penicillin and finally the wound has healed and the boy now walks about from place to place. I did not get any paid financially but blessings from the grandmother and from above which I cherish most.”

“Moreover, the grandmother was also a hypertensive patient, I check her blood pressure daily, advise her and tell her which medications to take and at what time of the day. She also has rheumatoid arthritis and I have been treating her since I moved in this community. In my neighbourhood, I have been caring for the kids when hospitals could not accept them, screened their parents and order their medications and has really help and today they all called me their physician but I refused to take the credit, telling them that it all belongs to God, even the little kids called me a doctor.” 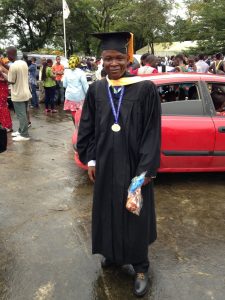 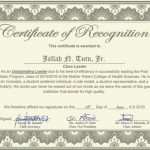 Upon graduating with his bachelors in September, 2016, Jallah got immediate employment after graduation by the MPCHS as a clinical supervisor that  October. His duties were to prepare semester clinical schedules for various health facilities, organize meetings for clinical staff, grade care plans as well as mentoring students at clinical sites and campus. He also got actively involved in teaching (outside of his job description) due to his passion for teaching. He began co-teaching Biochemistry, Microbiology and Pharmacology. After two semesters co-teaching, he was given the opportunity to teach Pharmacology. He taught this course for the first semester and his evaluation by students was excellent which led to one of the most senior colleagues requesting his assistance in the lecture notes especially preparing PowerPoint presentations using graphics. 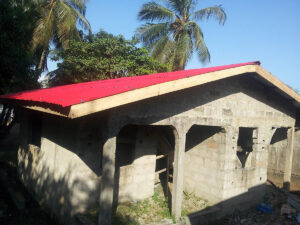 Jallah was renting a small room which, with the seasonal monsoon rains became flooded.  After incuring the cost of repairs that the landlord refused to cover, he sought for and found a property where he could build a modest building which would free him from renting and be a long-term investment in his economic stability. 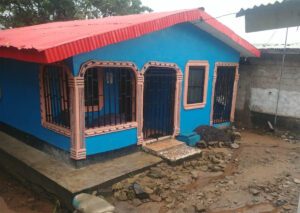 After purchasing the title deed, some months later he went to his property only to discover that it was sold to another party who had began building a two-room house on Jallah’s property.

This apparently can happen in Liberia if one doesn’t get the property markers installed proving that the plot is owned already. With support of the surrounding neighbours, Jallah went to court and won the settlement which favoured him with the building for only $1500.00 USD.  With generous contributions from supporters here in Canada, Jallah was able to finish the building project in stages over the following couple years.

In the summer of 2019, along with heavier than usual rainfall, a severe drainage problem cropped up in-front of Jallah’s house which was causing erosion to take control of the entire house.  Jallah reached out and was once again extremely grateful to all who have contributed financially toward remedying this problem and saving his investment. The house is now in much better shape and position because of your latest generous financial contribution.

Based upon these and many other innovative work carried out, Jallah was encouraged by the Dean, Sr. Barbara Brillant, to pursue a Master’s Degree in Nursing/Midwifery Education as a scholarship which would equip him for a 4-year service agreement after graduation. Again, after much thought and prayer about, it over a period of time, he then accepted the opportunity to better prepare himself to have a greater impact in his country of Liberia.

The study was very challenging; more writing was required by qualified professors from the USA. Despite the numerous challenges, and not able to get much sleep due to colleagues coming in daily for group studies and assistance with their assignments, he successfully completed the Masters’ of Science in Nursing and Midwifery Education after writing a final 14 paper which were reviewed by his close  mentor, Dr. Janet Gross. All in all his educational sojourn has had its steep challenges, but in the end, what matters is he made it through by the special grace of God.

With the knowledge gained, Jallah desires first to offer his services to the school (MPCHS) based on the MOU signed to serve for 4 years, renewable if he so desires. Then, he wants to become an entrepreneur by establishing a pharmacy from which he can train others and contribute to the Liberian society. It is goal to establish a Pharmacy and then other branches in and around Monrovia. He may also be offered the opportunity by the school to serve as a Director for the Bachelor Program upon graduation which will eventually help him generate extra income to prepare for his future plans.

“I find passion in impacting the youths through teaching theoretical and practical skills!”